If one is going to discuss the 1972 Capital Development Campaign at Boxwell, construction of Trading Posts and Camp offices is nice.  But the real excitement revolves the creation of Boxwell’s third resident camp–Camp Craig.

Named after the single largest contributor, Edwin W. Craig of Giles County, Camp Craig received the lion’s share of the 1972 Capital Development Campaign money.  At the time, attendance at camp was still extraordinarily high and even with running two camps for eight weeks of camp (plus a staff week) and a full family camp program at Murrey, it was obvious that another camp was needed.  The logical thing to do was to cut a new camp out of what was an absolutely enormous Camp Light.

The idea was not without precedent.  When Boxwell was first built, there were plans for a resident camp in Camp Light. Near the present day pool, a roundabout was cut out of the woods for a dining hall and slabs were laid for a waterfront.  But the camp was never built.  Light remained a wilderness camp and only Woodbadge used the area.  At the time, Camp “Beany Elam was in what would become site 6 at Craig.

With funding secure, construction began.  Unlike the other camps, Craig would have several unique differences.  It would boast an enormous dining hall which would include the dining hall, kitchen, Trading Post, Handicraft, and Rifle Range all in one location.  Unlike Parnell and Stahlman, there would only be one fully functional showerhouse with flush toilets.  Chemical toilets were put up around the camp.  Craig was very rustic by comparison with the other camps.

The next several weeks will look at Craig’s construction.  We will attempt to “build” Craig ourselves with a series of photos showing the development of the camp.  So, to begin, the first thing you have to have is a road.  Pictured here is the split outside of Site 1.  One branch becomes the lower loop while the other becomes the road leading to the dining hall. 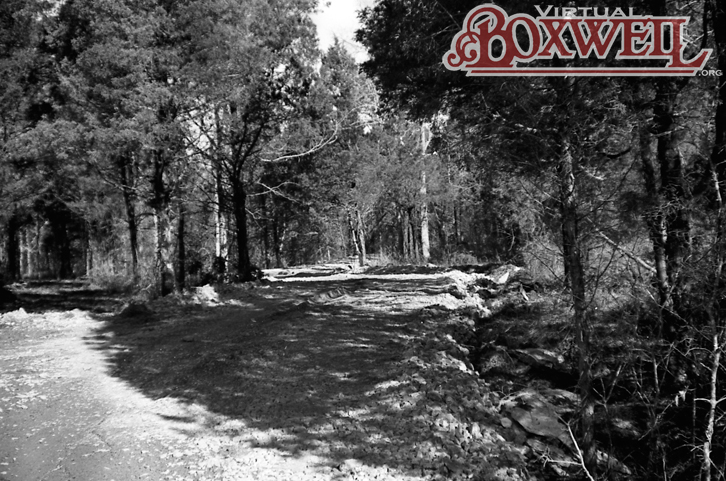 The split in Craig road leading to the dining hall. The spur to the left is the lower loop.

Just a reminder, Beaver Day (April 13!!) is approaching. There is a special project of working on campfire areas specifically set aside for former staff members.  Please notify me here or at webmaster@virtualboxwell.org if you are going to attend.  We want to get you involved with camp again!  I’m talking to you “Uncle Festus”!!

The VirtualBoxwell team would like to give a Special Thanks to Michael Seay.  Michael’s photos have been displayed very prominently lately and with good reason.  Michael was the Reservation’s Business Manager during the 1972 Capital Development Campaign and the construction that followed.  Michael’s photos are truly a treasure trove, capturing an immensely important part of Boxwell’s development.

It is almost impossible to thank Michael Seay enough for this absolutely incredible collection of photographs and slides.

Another photo of the Health Lodge under construction, winter 1973-1974.

Another photo of the Health Lodge under construction after the 1972 Capital Development Campaign.

Once completed, the Health Lodge quickly became part of the regular in and out of Boxwell.  For many years, from the 1970s into the early 1990s, the Health Lodge was run by a nurse/military medic supplied by Fort Campbell.  The Health Lodge has also become the home of the 1959 Capital Campaign painting of how Old Hickory Boxwell would look.  On the wall in the lobby hangs a painting of Boxwell… from 1959. 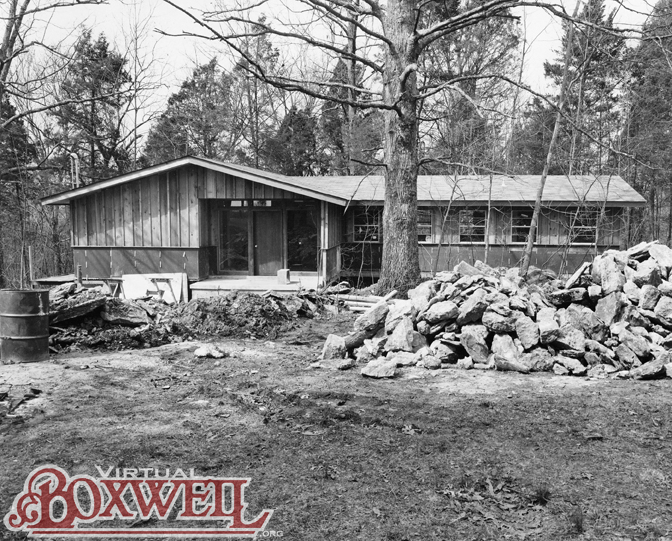