A school teacher in Metro schools during his “real life,” James “Jim” Barr joined Stahlman Staff as Waterfront Director in 1975.  He continued as Stahlman Staff until 1977, moved to Craig for three years, and then completed his tenure at Stahlman’s Waterfront in 1987.

Of course, Jim Barr is generally known as part of the leadership team of Ernie Ragsdale and Jim Barr.  Ironically, while known as the heart and soul of Stahlman throughout the 1980s, Ragsdale and Barr began their time together at Camp Craig.  Among younger staff, the connection between the two men was always mysterious.  Were they close simply because they were both teachers? Had they served in Vietnam together?  Regardless, according to Web Webster, “The fact was that while the two were separate; the two did a very good job at playing of good cop/ bad cop although sometimes it would be bad cop/worse cop.”

While we don’t know for sure if this story is true, there is a fascinating (but terribly sad) story concerning Ragsdale and Barr.  The two men had dinner (or had gone out together) the night Ernie died.    During the outing, Ernie complained he wasn’t feeling well and went home, where sitting in his chair at home, he suffered a heart attack and died.  Much like when Tom Willhite passed away after visiting with former camp staff friends, Barr was with Ragsdale hours before his death.  Sometimes camp staff bonds seem to transcend into the supernatural… 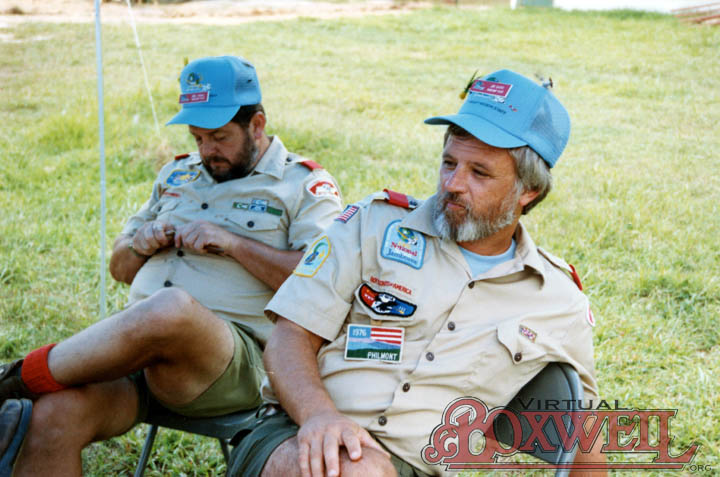 Ernie Ragsdale (left) and Jim Barr (right) at the 1989 National Scout Jamboree. As Barr himself explained, he and Ragsdale would often leave for the Jamboree a week early, spending two weeks away from home. Ragsdale would sometimes travel with as little $30 for the whole trip!