Trading Posts at Boxwell have gone through several incarnations.  The Commissaries at Parnell and Stahlman began life as Army Supply tents.  This was a hold over from the way the Trading Post had been done at Rock Island.

With the 1972 Capital Development Campaign, the Trading Posts got new permanent homes.  Seen here is the Stahlman Trading Post and Handicraft building under construction.  Unlike today, you can see that this was all one open building and the Trading Post itself had service windows, as we’ve shown before.

Around 2000, the Trading Posts were updated.  The Trading Post itself became a self-service room and at Stahlman, a divider was added between the Trading Post space and the Handicraft space.  This photo though gives you a good idea of the way the building was originally intended to operate. 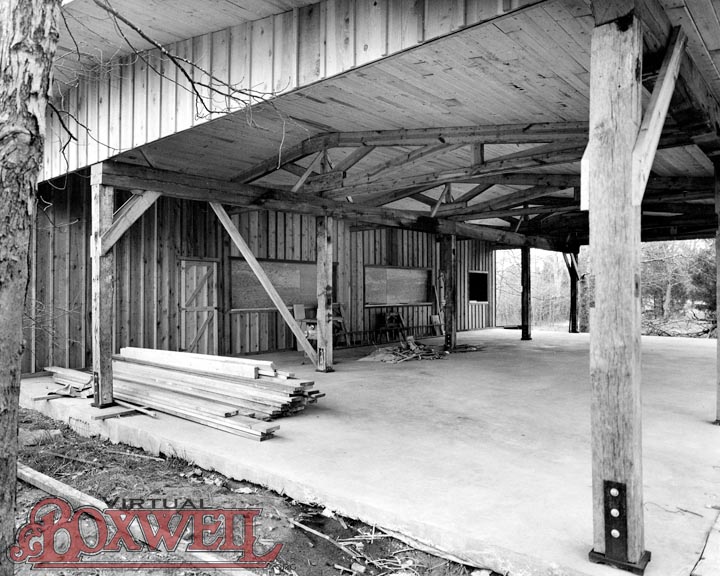 Stahlman Trading Post in its original unaltered form under construction about 1973.

In April of 1976, Boxwell hosted the largest muster of Scouts the Council had ever seen in celebration of the nation’s Bicentennial.  If you recall, we posted a wonderful photo from this even in August of 2014, though we got some of the details incorrect!

This article from The Tennessean actually outlines the weekend in greater detail, though, there are two interesting “flaws.”  First, the database for the article lists this story as being found on page 25, though it is clearly page 27.  Second, the caption for the photo lists the events taking place at Camp “Boxwood,” not Boxwell.  It is good to know we weren’t the only ones to get our details wrong!

This is the same event that culminated in the “Liberty” photo we showed in August 2014.

Generally, I’ve made a deliberate effort to NOT include photos of myself on VirtualBoxwell.org.  I want the site to be welcoming to everyone and to reflect the history of Boxwell for everyone.  In short, I don’t want this to seem like a vanity project.  However, after authoring this site since 2002 (15 years! Can you believe it?), perhaps it is finally time for a photo of your host!

This is me, Grady Eades, VirtualBoxwell.org’s webmaster, in 1994.  I was Camp Craig’s AY Director that year.  I started at Craig in 1990 as an AY Staff member, working for $20 a week for Jerry Barnett. I would continue as AY Director in 1994 and most of 1995 before I was “promoted” to Camp Commissioner halfway through the summer. 1996 was a full year as Commissioner and in 1997 I was Program Director at Camp Parnell.  At the time, I was 22 and the second youngest Program Director to ever serve in the role (behind Russell Parham who was 21 when he took the position at Stahlman in 1976). Just like anyone who has served on camp staff, I have a favorite year (1992–the year I learned to drive the tractor and Gertie!), and hold those years on Boxwell Staff (1990-1997) as the most profound of my life.

1997 was my last summer at Boxwell in an official capacity.  In 1998, I was in graduate school and, with several other “old timers,” began the VirtualBoxwell project.  We began scanning photos, conducting interviews, and preserving the camp’s history–a project that continues to this day.  The first version of the website went online in 2002 and I’ve been heading this project ever since, a role that eventually led to chairing the 2014 Staff Reunion, one of the highlights of my life.  My experience with Boxwell has been unbelievably rewarding!

Over the years, I’ve either worked with, met, or interviewed some of the most incredible people.  If I may be excused this small conceit, I can’t imagine my life without having met Kerry Parker, Russell Parham, Jerry Barnett, John Walker, John Estes, David Dotson, Mike Brown, Lance Ussery, Ron Bailey, Jason Bradford, Bo Collier, Robert Barnard, Jason Shumaker, John Neal, Tom Willhite and, literally, HOST of other individuals, far too many to mention in the brief posts I make here.  To say that Boxwell has had an influence on my life would be the greatest understatement I can make!  I hope that your camp staff experience was the same.

Am I done yet?  Absolutely NOT! There is a formal written history of Boxwell in the works and another staff reunion on the horizon, as well as Boxwell’s Centennial.  I have been a very small piece in a very large story, but I have been happy to do my part.  Stay tuned–there’s SO much more to come! 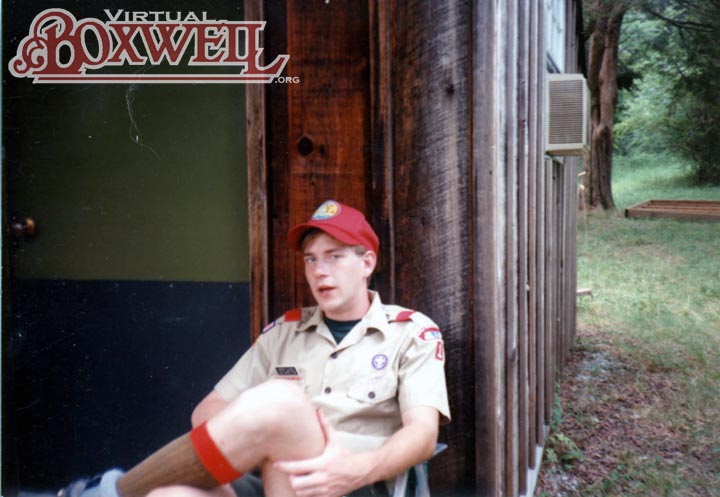 This is me, Grady Eades, as Activity Yard Director at Camp Craig in 1994. Tom Willhite was still Reservation Director and he referred to the Activity Yard as the “AY Yard,” something we all laughed about!

“Coach” William J. Anderson was the first Council Executive for what was then the Middle Tennessee Council.  It was a post he held from 1920 until 1947, which is quite a run.  In fact, the only other person to have a tenure this long was Anderson’s successor, Ward Akers.

As the first Council Exec, Anderson had quite an impact on middle Tennessee Scouting.  This article gives a nice overview of Anderson’s Scouting career as he prepares for retirement. 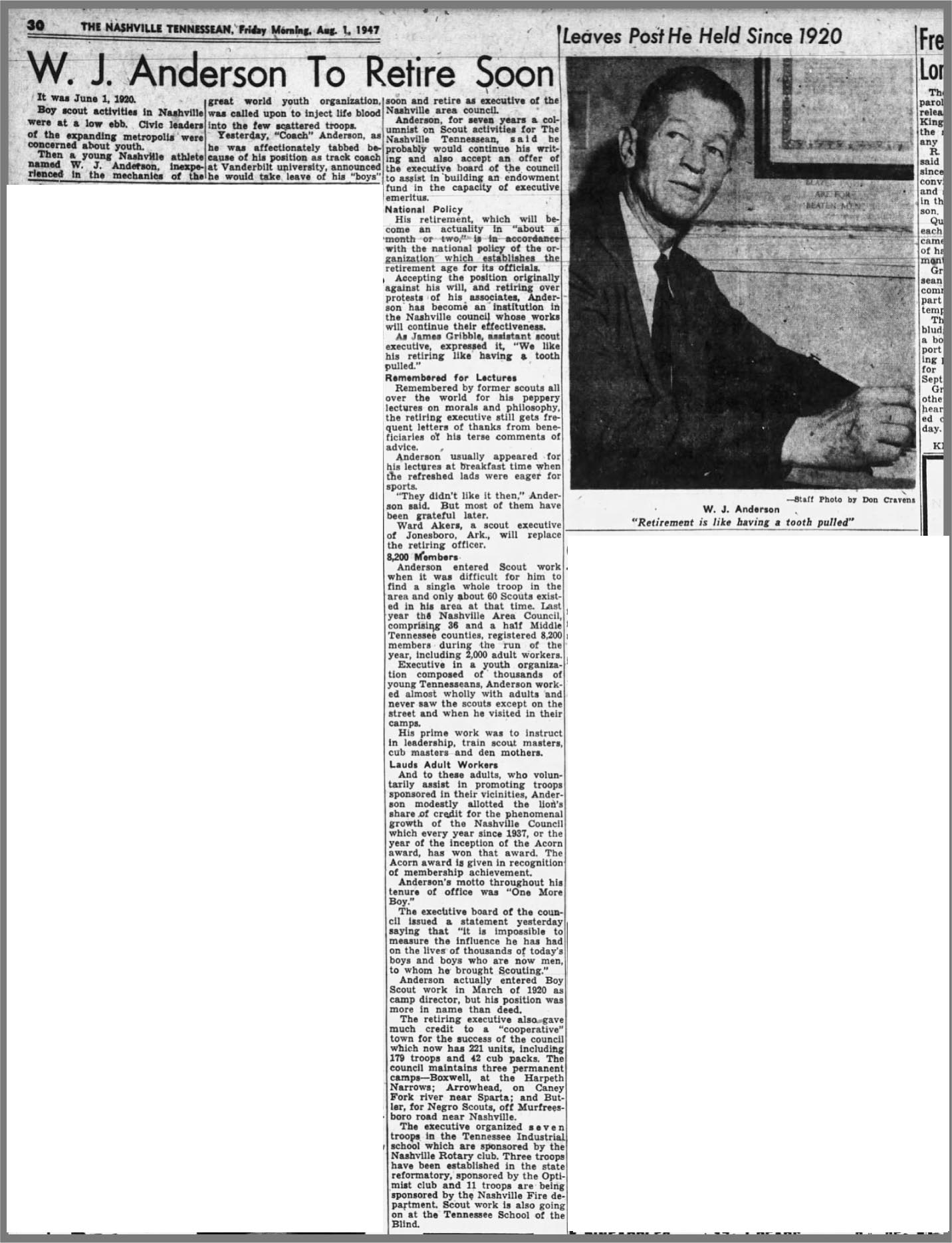 The retirement of the first Council President, W. J. Anderson in 1947.

For many years–at least from the 1980s through most of the 1990s–the Parnell/Craig staff had a tradition: they swerved.  As everyone knows, because Craig and Parnell had no working kitchen, during Staff Week, it was necessary for the staff to drive to Stahlman.  Thus, every day, three times a day, for a week, the staff had to go across the reservation.

Thus, to help break up the monotony of a regular drive, Parnell/Craig staff began to swerve.  It is not clear when exactly this began or why, but it can be easily imagined.  A long caravan of vehicles would leave Parnell or Craig and slowly began to swerve from one side of the road and then to the other, hazard lights blinking the whole time.

There was some variation, of course. Often staff would open the windows, stick out their arms, and “flap.”  The goal was to flap in unison. On turns, one side of arms would extend upward and the other down, as if banking.  Sometimes, the swerving went to extremes.  There was backward swerving and even some swerving that went off road.  Hazard lights were always blinking.

While an animated gif would likely be the best option here, you’ll just have to imagine! The image here is captured from the only known image of “swerving”–a screen capture from Jason Bradford’s 1998 film “Boxwell Reservation,” which captured life at Parnell in 1996 and 1997. 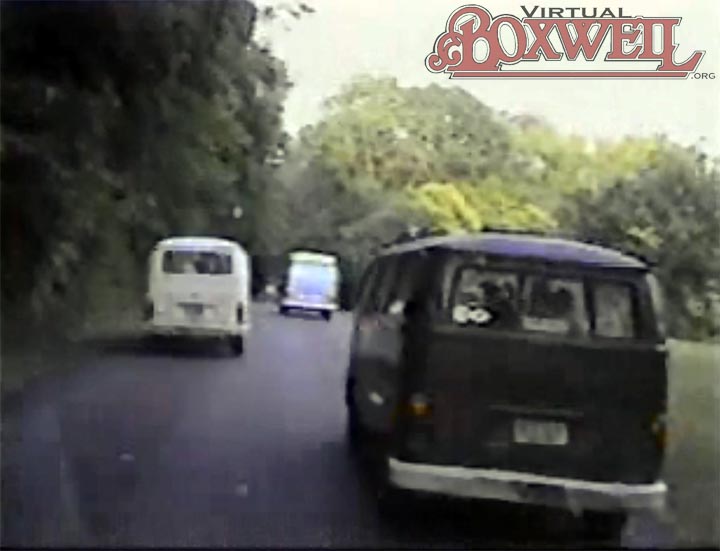