Here is a nice little piece on Scouts within the Council who return a native totem pole to Alaska.  Jonathan Wright and “Red” Kirby–both former staff members–are mentioned in the story.

We’ll be taking a break from our From the News and From the Archives series this week. We’ll be back to regular posting on Wednesday, November 30, 2016.

In the meantime, enjoy this lovely photo of a hen turkey and her poults outside the Travis/Adkins Aquatics Support Center.

Welcome to mealtime at Rock Island.  Much like every other meal you’ve ever seen or participated in at Boxwell, there were tables and chairs and food.  Beyond those items, the experience started to take a turn!

As you can tell, this “dining hall” was not actually a building at all, but a tent.  You can see that the flaps were rolled up and you can clearly see the cars parked nearby.  There is also an upright right in the middle of the tent to which the electric light is attached.  Thus, there weren’t hard floors either, but saw dust floors.

You’ll also note the dishes on the table itself.  There are no trays here, though they did have monitors.  For the most part, there was no program either.  As James Akers explained, “There were ‘announcments.’ Don’t really remember any real programs.  It was hard to focus under a circus tent. Most of us were so hungry, we were focused on the food.”

What could you expect to eat at a Rock Island meal? An assortment of items actually.  Again, Akers explained, “I remember best the lima beans and peanut butter.  There was always plenty of government surplus peanut butter in number 10 cans.” 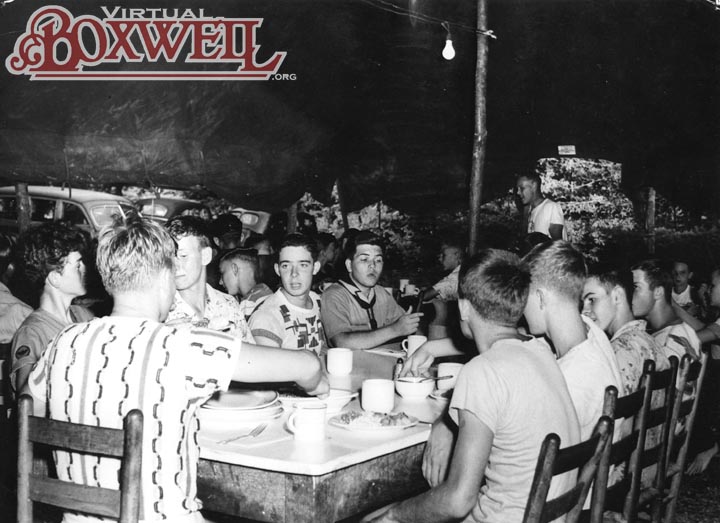 A meal at the Rock Island “dining hall.” Bob Alley identified the tent as an E-8 military tent.

Here’s a little bit of a happy news from the recent past. A fourth grader from White House received the National Council’s Good Turn Award in 2003 for his patriotism.  Read more below. 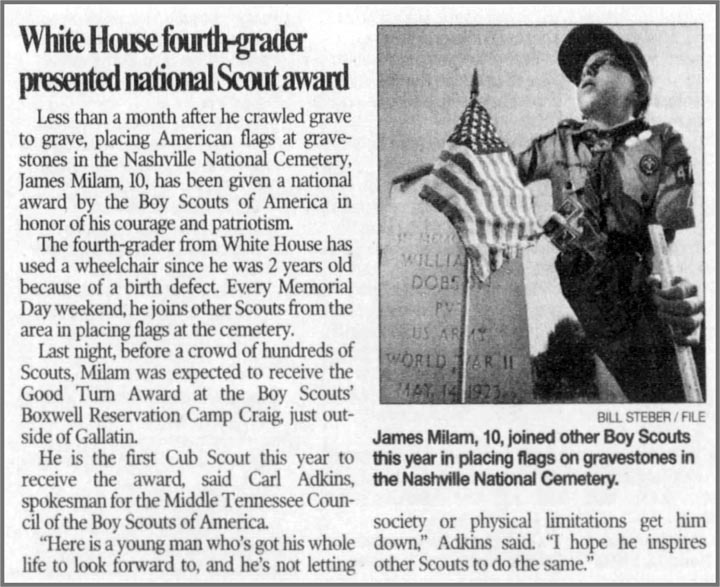 James Milam was 10 at the time of the award–the youngest Scout to receive the award.

The VirtualBoxwell Team is sad to announce the passing of Jack Holt, a former Stahlman Staff member.

According to our records, Holt served on Boxwell Staff from 1980 until about 1991.  During this tenure, he served as Kitchen Director and then Field Sports Director.  He is survived in part by his son Joe L. Holt, also a Stahlman Staff member in the 1980s.