The Jimmy Stevens-Beany Elam Collection has a lot of great images in it. We’ve seen some early photos of Woodbadge as well as some of the hand-drawn art of Beany Elam himself. The examples over the last few weeks show what a treasure this collection is.

So, this week a photo of the Linton Boxwell Waterfront. Located on the Little Harpeth River, this photo shows a set of wooden stairs leading down to the actual river itself. There’s not a lot to point out here, but it should be noted that the Boy Scout program at this point (1920s) had not yet developed the buddy system. So, this was an every man for himself exercise! 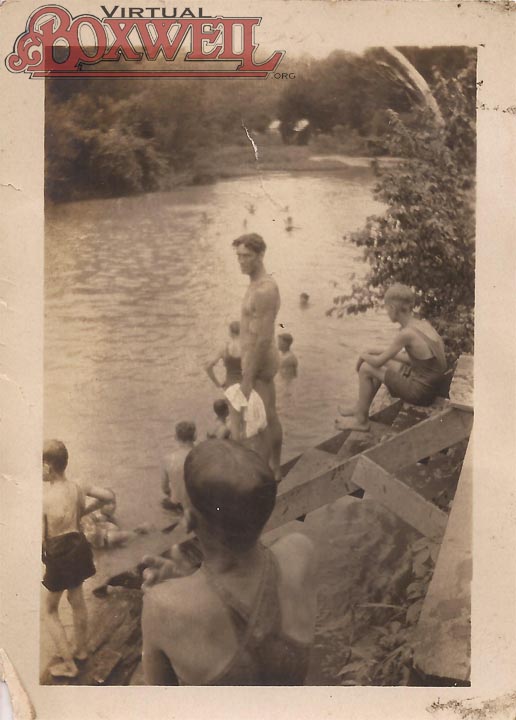 The only original photo we possess of the Linton Boxwell waterfront.

A new Boxwell–tentatively known as Boxwell III–opened in 1949 in Walling, TN.  We know this as the Rock Island Boxwell and today it is the Charles E. Parish Reserve.

Here we see photos from the first summer that the Rock Island Boxwell opened.  As you can tell, as of June 12, the camp was not ready to go!  According to former staff member Bob Alley, Staff Week for Rock Island usually lasted two weeks.  This certainly holds true for this first summer as the Rock Island would accept its first Scouts on June 26.

Trying to find one drawing to encapsulate the work of Beany Elam is like trying to find one Beatles song that exemplifies the entire catalog; it can’t be done. Indeed, we could easily spend the rest of the year simply showcasing Elam’s work and never quite capture it completely.

Nevertheless, this week we make an attempt to demonstrate the artistry of Beany Elam to those who may not be familiar. Elam was a prolific sketcher. From more detailed drawings like this one to caricatures of individuals he worked with to simple stick man drawings, Elam was constantly creating.

This drawing is one of many Elam completed for the various Woodbadge sections he was involved with. This particular drawing was for MT-3 in 1956. Elam was Scoutmaster of this Rock Island Woodbadge training. The initials carved in the tree are the staff for Mt-3 (D.S. for Don Starin, E.D.R. for Ed D. Roberts, J.G. for Jim Gray, B.E. for Beany Elam, Y for Wayne Yearwood). 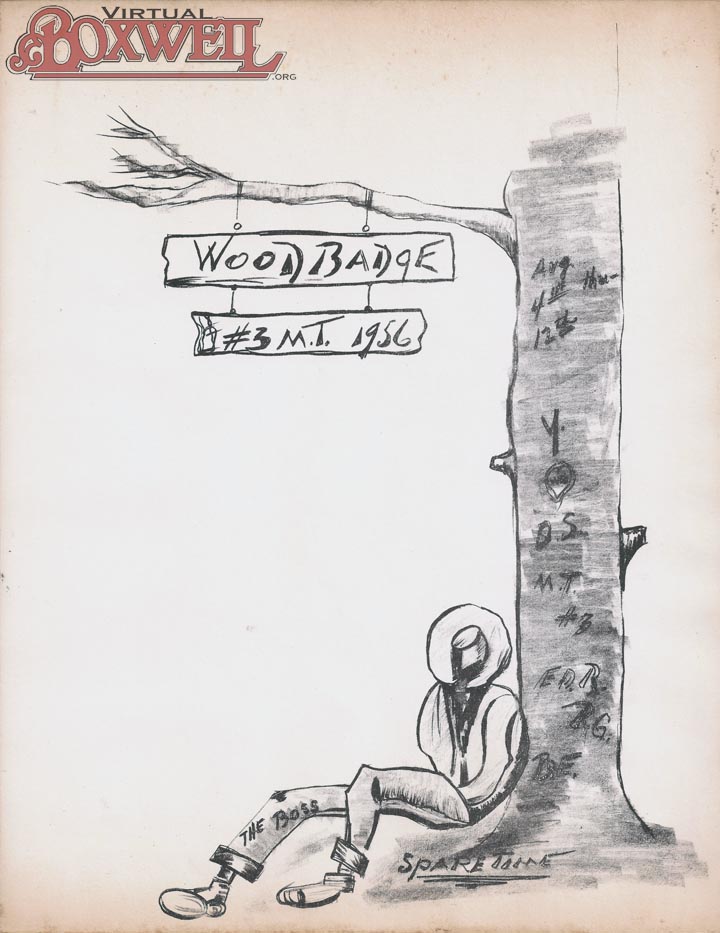 Artwork created by Beany Elam for MT-3 at Rock Island, 1956.

As the Council announced Silver Beaver recipients this week, it seems appropriate to show an article doing the same from a few years back. Despite the title of the article, the subject is actually quite straight-forward.  After pointing out the Silver Beaver recipients, the article goes on to identify the newly elected Council officers.  1953 was apparently a big year! 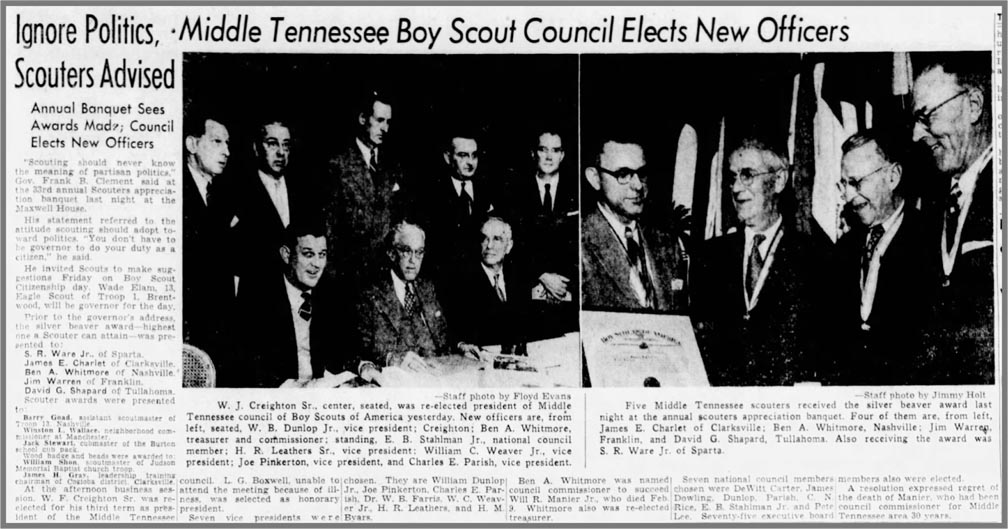 If you’re going to go through a collection of materials from Harry “Beany” Elam, it seems appropriate that you present something on Woodbadge. After all, the Woodbadge area at Boxwell is named for Elam.

Elam attended Woodbadge 34 when it was Rock Island (Elam claims this was 1952, while Creighton’s _Boys Will Be Men_ says 1951). From there, Elam officially completed his “ticket” in January 1954 and was then certified to become a Woodbadge Course Director in May 1954. Thus, Elam became the first Scoutmaster for Middle Tennessee Council Woodbadge, MT-1, also held at Rock Island. MT-1 lasted one week, from July 31 to August 8.

Pictured here is the staff of MT-1, which included Elam as Scoutmaster (third from right), Ted Childress of Mississippi as ASM, Jim Cray of Clarksville as ASM, Ed Roberts of Nashville as SPL, Robert Davis of Clarksville as QM, and Wayne Yearwood as QM. There were only three patrols in MT-1: Bouncing Bobwhites, War Eagles, and Fabulous Furry Foxes. Among those participating in MT-1 included Hershel Tolbert (later to be Council Executive) and John Green of Troop 137 in Franklin, TN. 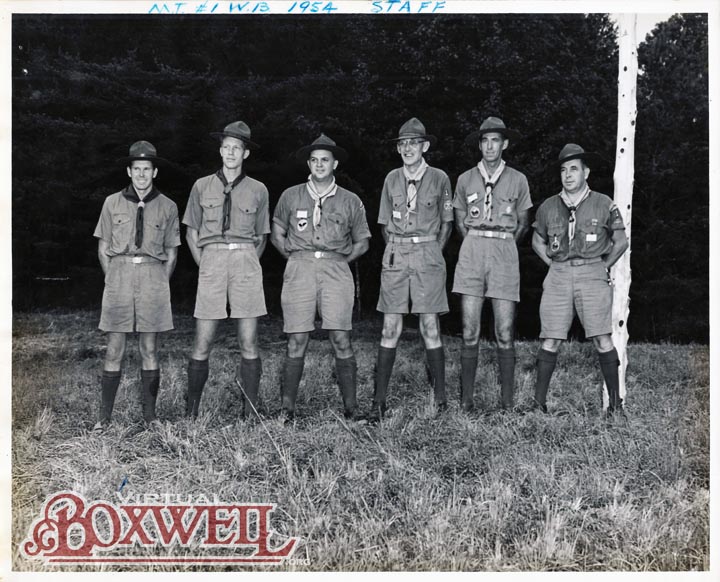