We continue our look at some Council history this week with two more pages from the Council publication Half a Century published in 1970. Unlike last week, this time we get a little information that is Council specific, but not a lot. Again, let’s fill in some holes.

Leslie Boxwell retired as President of the Council in 1947; Coach William Anderson retired later that same year. From 1948 through the 1950s, Ward E. Akers served as Council Executive. The number of Scouts had risen from 2941 in 1940 to 4100 by 1946. We don’t have any 1950s numbers, but know that the baby boom is on the way! Council troops participated in the war effort; Anderson warned of the dangers of Communism after his retirement. With the arrival of Akers, the council reorganized by districts and the ranks of the professionals exploded. The Long Hunter Award was introduced in 1952 and the first Woodbadge course held in middle Tennessee in 1952 (WB-34). In 1959, the co-ed version of Exploring was introduced.

And on the Boxwell front? These pages mention the very beginnings of Old Hickory Boxwell, but they ignore the other Boxwell history. Boxwell at the Narrows continued until 1948. Boxwell moved to Rock Island in 1949 and stayed there until 1959. Apparently, the Rock Island Boxwell was not satisfactory as a new location was desired as early as 1952! 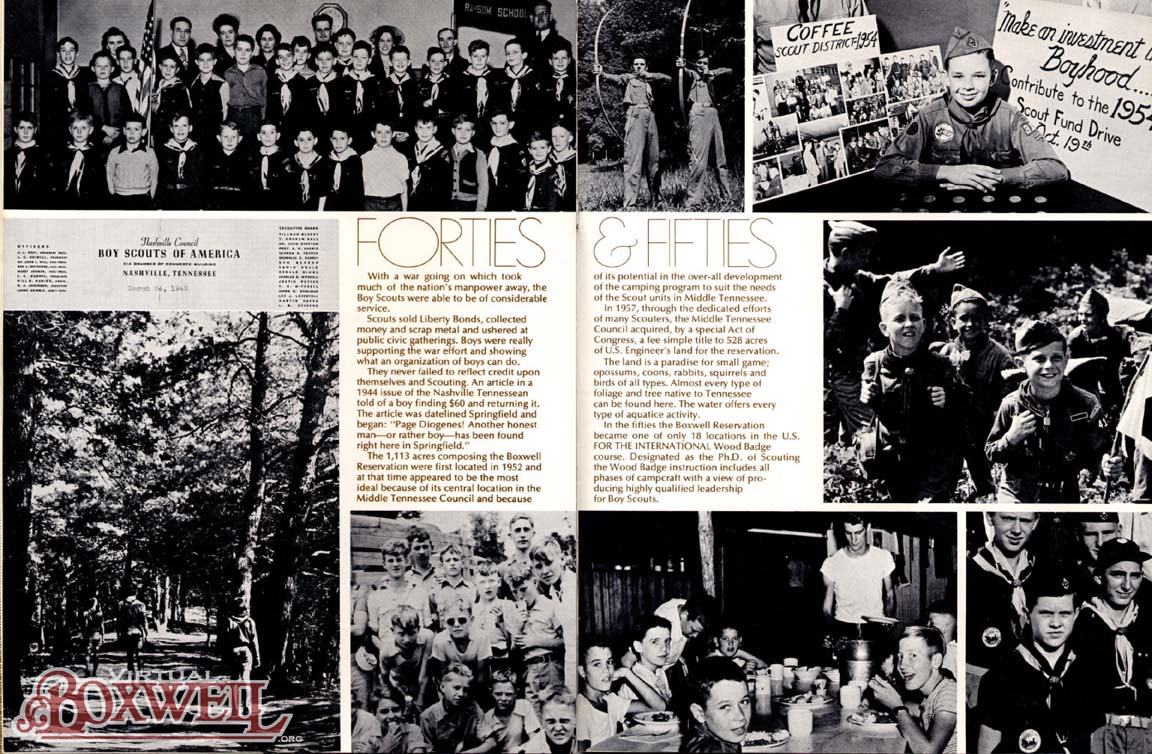 The Forties and Fifties section from the 1970 publication, Half A Century.

Mr. Tom Parker. Many others could fill in more details about Mr. Tom Parker than myself, but he was another one of those men that I, for one, looked up to as a mentor during my first years as a staff member. Mr. Parker was a school teacher in Sparta TN, and while I am not sure if he ever worked at Rock Island, I do know that he was at Boxwell – Old Hickory Lake — while it was being constructed. He used to tell a story about when some portions of Stahlman were still under construction in1959. As I recall the story, it had rained a good portion of the week and everything was muddy (I am sure that the construction work compounded the normal problem). Early one morning while still laying in his bunk, he heard a faint cry. This caught his attention, as well as that of another older staff member. At first they thought they were hearing things because they would hear this very faint call for ‘help’ and then silence for some time. This cycle of a faint cry for help then silence when on for some time until Mr. Parker decided to investigate. I remember him telling it took awhile to even determine the direction of this distress call. Finally they ending up at Shower House # 3 and found a young scout who had fallen in a small hole. The mud was so thick and the surrounding ground slick that the young fellow could not climb out. They were able to rescue him with no incident but I am sure that ‘unknown’ scout never forgot the incident.

Mr. Tom Parker was the director of the Conversation Yard at Camp Stahlman for a number of years during the 60’s and 70’s. This was a time before the emphasis on ‘environment,’ when Soil and Water was a required Eagle merit badge. Each year Mr. Parker would show up for camp in his old 19?? Chevy truck, painted white, which everyone referred to as the ‘White Phantom’. He always loaded the back of his truck and sometimes a small aluminum boat with mason jar after mason jar filled with biology samples of birds, baby pigs, and other sundry animals all preserved in formaldehyde. Mr. Parker loved the Scouting program and expected you to do your best. Anyone who has taken Soil and Water under him, remembers spending the entire 2 – 4 p.m. period (or more) under the dining hall exhaust fans on the north side of Stahlman kitchen taking his test. We were expected to read and understand the entire merit badge pamphlet. To this day I still remember his definition of conservation: “Conservation is the wise and efficient use of our natural resources, so that they be of the greatest use for the largest amount of people for the longest amount of time”.

Very few scouts ever worked on Bird Study merit badge, but each Sunday afternoon during the Scoutmaster’s Roundtable Mr. Parker would always announce that ‘anyone wishing to take Bird Study merit badge should meet me at the flag pole at 5:30 a.m. starting Monday morning’. He generally followed up this announcement with a show of hands of Scoutmaster who knew of scouts interested in Bird Study. I must assume that when these adults reported back to their scouts that they had to get up before 5:30, most backed out. I remember Mr. Parker venting frustration when no one showed up after promising him they would be there.

During the late 70’s Mr. Parker also doubled as the camp medic because of his background with the rescue service in White County. One true story that he told still sends shivers down my back. One day he was cutting tree limbs with a chain saw. At one point a branch popped back forcing the running chain saw into this throat. Mr. Parker had the skill and the presence of mind to take a dirty handkerchief and hold it against the gash in his throat while he drove himself to the hospital! When he arrived at the hospital, the doctors requested that he remove the handkerchief so they could examine the wound. Mr. Parker refused until they had a surgical team ready. Of course, he missed a couple of years from camp after this, but in the late 70’s he did return with his voice intact and still able to sing ‘Ole Man River’ — one more of his trademarks and talents.

Half A Century, Part 2

We continue our look at some Council history this week with two more pages from the Council publication Half a Century, published in 1970. Ironically, the write up here on the 1930s has almost nothing to do with the Council. So, let’s see if we can fill in some holes.

Coach William Anderson served as Scout Executive and Leslie G. Boxwell served as Council president throughout the 1930s. The number of Scouts had risen from 277 in 1920 to 2040 by 1930. By 1940, the total number of Boy Scouts was up to 2941. 1938 was a particularly pivotal year as both Cub Scouts and black Scouting were added to the council roster. Wa-Hi-Nasa was also founded in 1938. Scouts also served as Governor and Mayor for a day and participated in an annual Field meet. Percy Warner Park was high traffic area for Scout camping and hiking. And this is just the tip of the iceberg! 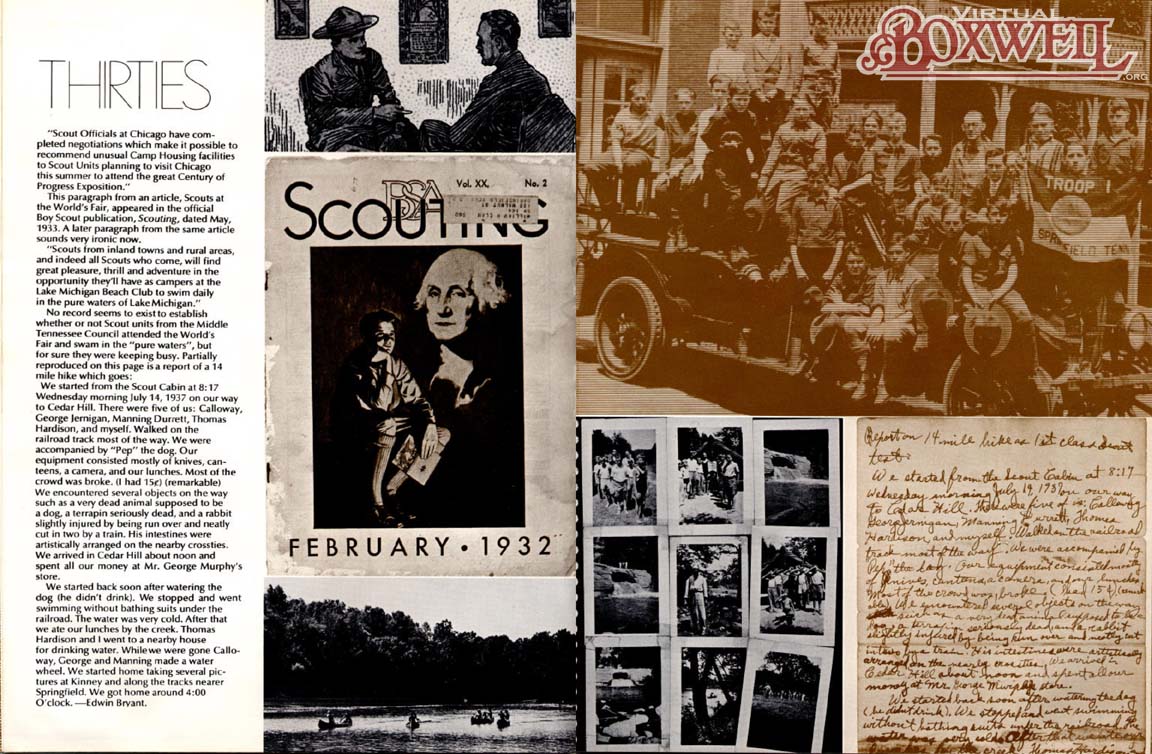 “Thirties” from the Middle Tennessee Council publication _Half a Century_, published in 1970

We use to chase cows out around Akers lake on the front bumper of my old ’55 Chevy. If I remember correctly, Kerry [Parker] was on the right bumper and Charlie Ray Smith was on the left bumper of my old ’55 Chevy. We would drive out into the field in the dead of night and “herd” cattle with guys on the front doing the bulldogging. Not a real safe thing to do but when you’re “unsupervised” camp staff members your sense of judgment becomes a bit warped. This was in 1968 and the old car was pretty ragged but it got us where we wanted to go. We would make the run into Lebanon or Gallatin in those days on the sly because staff was only allowed to go to town on Wednesday nights. I can remember having seven or eight staff members in this car coming back from Gallatin on 109 and being stopped by the police because we were speeding but only down hill. My speedometer had broken years ago and I told the THP that I really didn’t think this old bucket of bolts could go that fast. He saw that we were camp staff members and let us off with a warning.

In those early ’60’s they would load us up on to take us in to Lebanon to the movies in a flatbed stake truck that had carried cows earlier. We were really smelling good when we hit the streets of Lebanon.

One year while I was teaching Pioneering merit badge, the Georgia Boot
Company came to camp to get us to build a raft so that they could take
pictures for a commercial. We built it out at Duck Head and had to stick Styrofoam underneath it to keep the kid’s boots dry. They got to keep the boots, we (the staff) got a hardy handshake.

Back in those days we had the typical Parnell and Stahlman rivalry with
campfire stacks in jeopardy each week. I can remember cutting up a black walnut tree with a 12″ diameter center of the prettiest walnut you ever say to make the base logs for a Friday night campfire.

Half A Century, Part 1

Over the next few weeks, we thought it might be nice to do a little review of the Council’s history.

The Council was officially formed on March 1, 1920, though Scouting had been going on in middle Tennessee for years before this. In 1970, the Council celebrated this half century with the publication of a glossy paper booklet titled “Half a Century.” The booklet broke down the Council’s history by decades and include historic photos and a brief write up of each period. 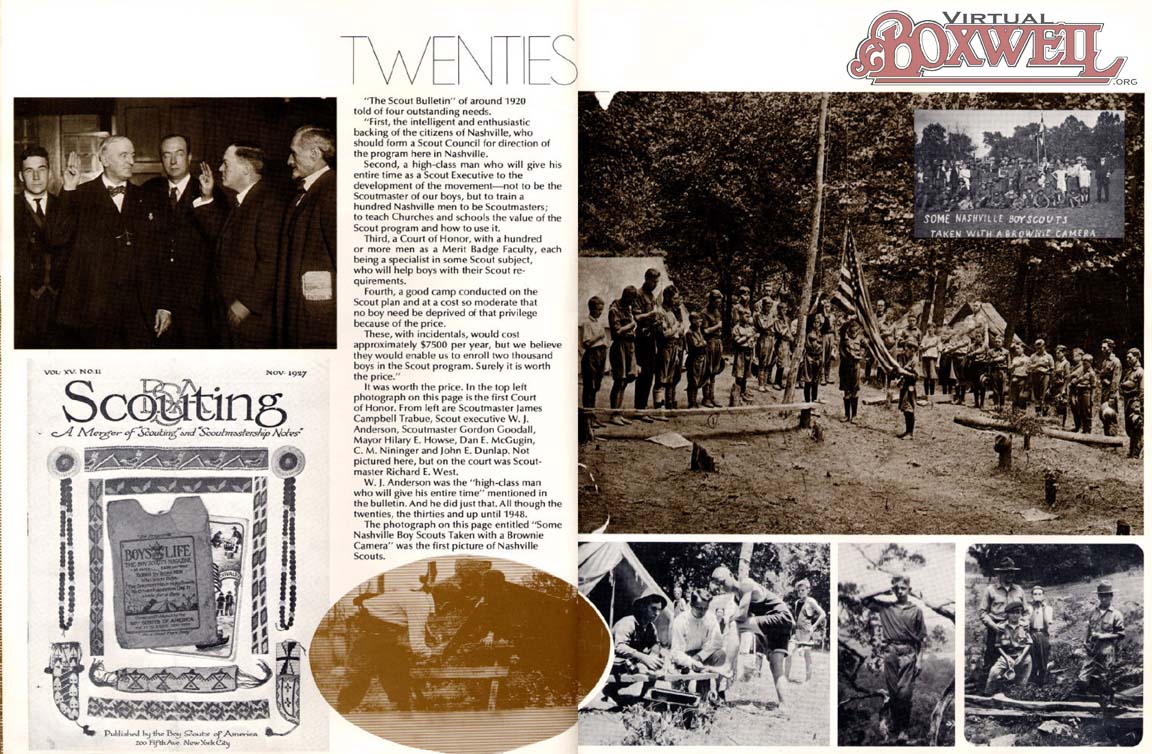 “Twenties” from the Middle Tennessee Council publication _Half a Century_, published in 1970